It was the best educational experience of my 40 years of teaching here. Thank you. 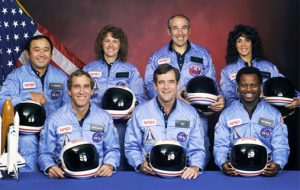 What started out as a tragedy on a frigid Florida morning on Jan. 28, 1986, has turned into a monumental educational triumph. The Challenger Center for Space Science Education, which serves as a living legacy to the seven astronauts lost on the space shuttle Challenger, for more than a quarter century has used science and math to help students build the skills most needed for the 21st century, including decision making, teamwork, problem solving, and communication.

The Challenger Learning Center in Wheeling opened in 1994 and is one of 48 centers worldwide. Since our founding we have reached more than 350,000 students and adult learners. Each year more than 30,000 students fly missions either here on site in Wheeling or via videoconferencing through our e-Missions™ program. Our Challenger Learning Center has been honored repeatedly at the annual awards conference in three categories: Most Students Served, Most Missions Flown, and Most Teachers Trained.

During a two-hour mission, participants serve on one of eight teams in mission control or on the space station. Merging the power of imagination with the excitement of discovery, students become engineers and scientists as they simulate a space mission. The experience provides students along with teachers and adult learners with simulations that emphasize teamwork, problem-solving, decision-making and communication skills.

With the addition of the Micronauts program, Wheeling is the only Challenger Center whose Micronauts program has its own exhibit hall. This colorful and vibrant exploratorium invites younger children, those in grades K-3, to experience a variety of hands-on activities that will spur their interest in science and math and the joy of learning.

Challenger’s e-Missions™ are distance learning videoconference simulations in which students connect with a flight director at the center and use their problem solving, math, and science abilities to work their way through a scenario fraught with crises. Each year more than 750 video connections are made to classrooms around the world. In fact, e-Missions have now been delivered to 20 countries in addition to all 50 of the United States. President George W. Bush even took part in an e-Mission in 2004 while visiting a school in Pennsylvania.

Challenger’s e-Lab™ program for grades 4-12, and e-Labs Jr.™ for grades K-3, offer virtual and interactive lessons in various science subjects, such as physical science, chemistry, life science and Earth science that include a one-hour live video conference event. During an e-Lab scientists perform experiments and demonstrations, guide students through difficult concepts, while asking and answering questions. Students are inspired to ask questions and draw conclusions to deepen their understanding of many core concepts.

e-TechTeach™ – Today’s teachers face new challenges with students whose lives are dominated by technology. Many traditional teaching methods fail to capture the interest of these upcoming “technocitizens” or to provide them the skills needed for the 21st century and beyond. e-TechTeach™ strives to educate teachers on how to effectively use technology in their instruction; to go beyond the walls of a traditional classroom and create student-centered lessons aligned with the national standards as well as 21st Century Skills. Teachers will gain an understanding of how to implement a “flipped classroom,” in which lesson material is presented through video, and class time is spent working on activities that promote higher order thinking skills.